A few children in my class need a bit of extra support in literacy. On a course at the NLC literacy base I was shown the idea of scribing sentences and then cutting them up. The result could be given to pupils to sort out on a wee board with slots and then optionally copied into a jotter.

Given my poor handwriting (unless I really slow down), difficulty in keeping resources organised and liking for digital I had a go at making a virtual version.

The first iteration just presents a field, typing a sentence and hitting return produces mixed up words to drag around. I’ve been using that for a couple of months.

I’ve then improved things a little by making a system to create links to that page that will have a particular sentence already created. Example

I’ve been sending these links out via Airdrop either directly on a few together in a note. I though I might make the page creation a little easier and also add a QR code creator: Mix Up Maker – Make a Cutup sentence or story..

I can then add the QR Codes to my pupils programs. These pupils have daily task sheets put in their jotter. 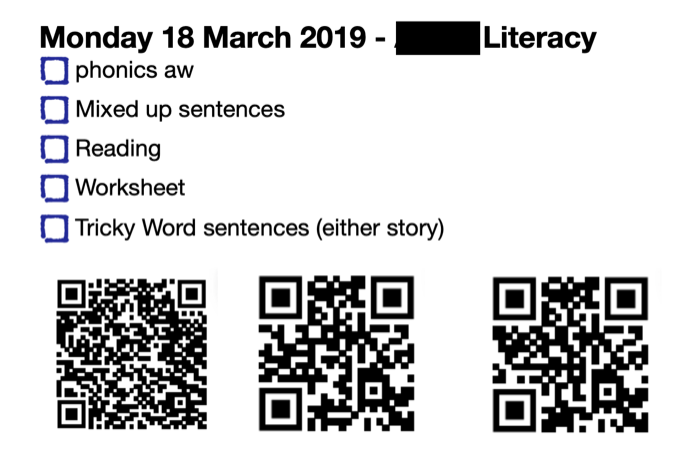 I am depending on the QR code API and the TinyURL.com API.

As usual the code in there is a bit of a mess. I always think I’ll tidy these things up, but rarely do. I need more time than I seem to have to really learn JavaScript so I continue to type and test.

The gifs above are made with LICEcap which does a great job of creating short gif ‘screencasts’.

10 thoughts on “Cut Up Sentences”