I’ve messed about with the twitter API before in a ham fisted sort of way (say ObliqueTweet, twitter presenter or Tweets @iowconference08) by basically borrowing various snippets of code, this is another such effort.

I notice an interesting post on Tom Smith’s theOTHERblog: Twitter, Growl, Boosh! In AppleScript!!. I’ve borrowed code from Tom before and was interested in this latest script. The script basically used growl to show tweets for a search or hashtag to be used when watch tv with a group spread over different locations. Tom’s script used the Vienna rss reader as a intermediary for handling the RSS. I recently switched from Vienna to NetNewsWire and didn’t have Vienna installed so took a slightly different approach.

I remembered that someone had mentioned that AppleScript handles xml now (via the ‘System Events’ application) and this seemed like an opportunity to mess about with that and growl. 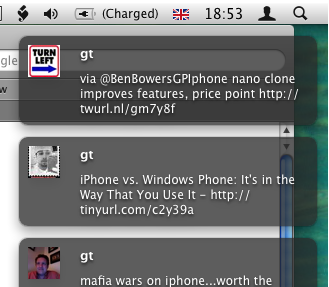 I’ve cobbled together an applescript that runs and every minute, downloads the latest from a twitter search and growls them. The script is pretty rough at the moment (and in all likelihood will stay that way) but I’ve posted it for view and will upload the actual script once it looks a wee bit better.

The script might be of use in the same way Tom’s is, to display tweets over a shared experience. Or perhaps so make sure I don’t miss an @johnjohnston tweet but don’t get caught up in twitter while I am ‘working’ but really it served to give me a bit more practice with the twitter search API and in starting to learn to parse xml with AppleScript. As twitter become bigger by the second and its API continues to grow I hope one day I’ll do something useful.