57 blog post here this year. My favourite is probably RSS Serendipity. 57 compares to about a 87 post average over the last 10 years.

Another 20 blog posts on my DS106 blog. Can’t choose a favourite there, my 106 posts have an even smaller potential audience than here, but I love them more for that!

I also knitted a few webpages linked to DS106, DS106 GiF TV is by far the most interesting and fun (if somewhat incomprehensible ).

103 gifs posted to tumblr jjgifs, March with 22 gifs was the busiest, not sure what I was thinking of…

Two of my gifs were featured on the Tumblr radar, skewing my stats somewhat and making my tumblr output the most popular of my online publications by a long way. It was quite amusing watching the likes pile on, as far as I can see the radar is pretty random but this many likes cheered me up at the start of 2014. 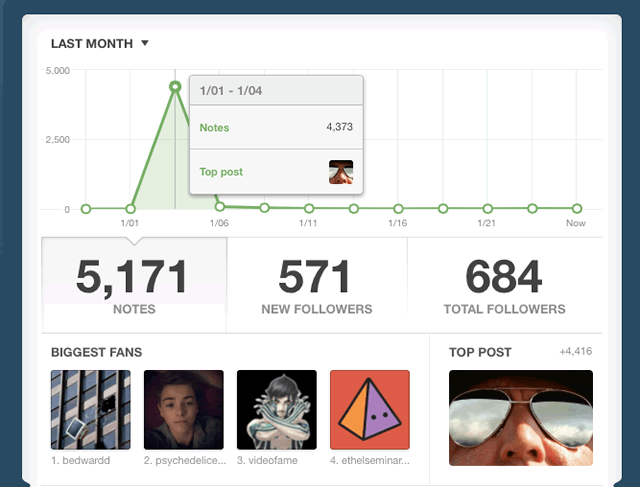 17 Youtube videos posted: YouTube John Johnston the most popular with 340 views was Journey into DS106 tdc762 most of the rest were ds106 inspired too.

6 Videos posted to vimeo, I think of vimeo as a bit more seriously than youtube. 4 out of 6 of these were for the day job.

We produced a fair number of podcasts over on Edutalk this year, it is a great experience, we have had some lovely conversations and learnt a lot talking to all sorts of folk. Lots of interesting plans and possibilities for 2015.

I’ve used a few new services in 2014: Known, What do I Know?; Fargo (I started playing with Fargo in 2013, and have blogged about it a few times); other software from Dave Winer and Smallest Federated Wiki, which I am only just beginning to get a clue about.

I also set up home in a ~tilde club: totallynuclear.club/~troutcolor where I’ve also set up a River4, another RSS application from Davie Winer.

All of these places are really interesting and I hope to be digging into them more later on. I’ll post some basic information soon.

I’ve not gather stats for these places, but I tweeted a far bit and posted quite a few pictures to instagram. I am sure I’ve posted other things in other places too….

This will bring the 10th birthday of this blog in February, as usually I post an unstructured pile of stuff lacking overall focus or any hope of a plan. This might not make this a great blog, but I continue to enjoy the process.

I’ve just added a page to the blog that lists All Posts, made it easy to find other end of year reviews, not a lot of consistency of approach: