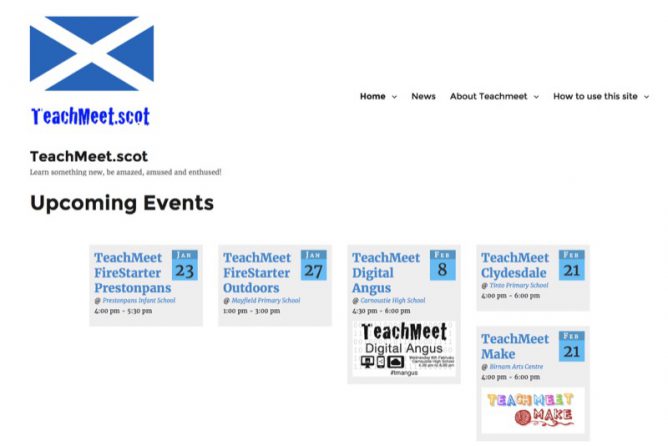 Over the years I’ve enjoyed being part of Teach Meet. This new site aims to help promote TeachMeets in Scotland TeachMeet.scot.

From pretty much the start TeachMeets have been organised on the TeachMeet wiki. This can at times get a little messy. There has been various attempts to tidy it up, some breakaway sites. I even worked on an attempt inspired by Ewan to make an alternative international site. That last came to naught.

Very much in my opinion the wiki site does not function well: the front page was huge, with large graphics, spam was getting out of hand too. A couple of years ago I’d spent some time deleting spam comment, and suggested a reduction in logo size on the front page. This didn’t have any impact and I am sure that many folk are quite happy with the wiki.

The new teachmeet.scot site was inspired when talking to Feargual, Susan and Athole last year.

They had set up tmscot.wordpress.com in an attempt to reboot TeachMeet and Scotland and make organising & publicising TeachMeets a little simpler in Scotland. I was interesting in making something a little bit more usable than the pbwiki site.

TeachMeet.scot is the result. It was ‘soft’ launched last year and has been used to organise a few TeachMeets.

It is a work in progress, the aim to be a simple, easy to navigate site. It is open to anyone to use. Currently you can add a TeachMeet in a couple of ways: you can fill in a form and someone will add it for you or you can request an account and add as many as you like. How you organise a meet is up to you, you could use a contact form on the post, an embedded google form, link to eventbright or whatever you like to get folk to sign up1.

It could be used instead of or as well as the TeachMeet Wiki site. We are hoping it will be useful rather than exclusive. There is no axes being ground, no profits being made. I organise the hosting and own the domain, but I consider it held in trust for TeachMeet rather than owned.

If you are organising a TeachMeet in Scotland please have a look and consider using the site. There are plenty of folk who will help you get started if you need a hand. How to use this site – TeachMeet.scot

1. Longer term it is hope to have a booking system built into the sire as another alternative. ↩