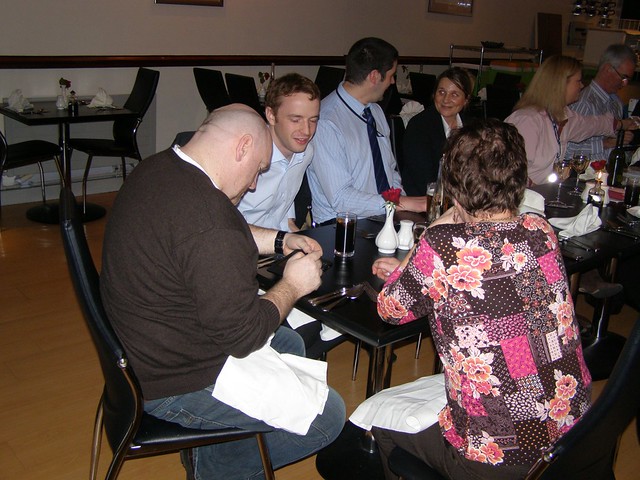 Yesterday evening I was in Perth courtesy of Krysia who kindly give me a lift to and from Glasgow through a fair amount of fog.
We were there for TeachMeet 08 North. T oget the idea of how good teachMeet is think how far you would go for some cpd on a Tuesday Night. The ScotsEduBlogoSphere had come from far and wide. None further than Ian Stuart of Isly High school who had set off at 8:30 am to get there.

As the event was set up the Sandaig macbook was pressed into service to run the flashmeeting which brought in an audience from further afield, I think I spotted Sinclair and Joe Dale in there. Flashmeeting is an amazing service, it is increadable that with a standard macbook and a wifif connection you can broadcast watch-able quality video and sound. The macbook was attached to Mr W’s snowball mic, I think it could get used to having such a great piece of kit attached to it. This meant that I could not tweet microblog the presentations which on a little refection was probably a blessing for my followers.

The meat of the event were the Seven minute micropresentations chosen as is becoming traditional by electronic fruit machine. The presentations were great, it always shocks me finding out how much I do not know about teaching with technology.

Ian Stuart kicked off telling us what’s been happening in Islay High School. I heard Ian at the SLF where I was amazed at the radical way the school is transforming teaching.

At teachmeet Ian focused more on the umpc technology the children are using, the power of these tiny devices is amazing. Small devices were a bit of theme at the meet, Asus minibooks, PSPs and other wee computers dotted the audience and dinner table.
I was lucky enough to be sitting with Bob Hill who leant me (or did I just borrow) his Eee PC with which I could watch the flashmeeting meaning Tess Watson‘s voice was in sterio until I found how to mute the sound.
These small pcs look like being the vanguard of a realistic one2one program. (and according to Robert Jones a possibility of getting Linux into schools). I would take a very long blog post to cover all of the ideas that came out of the 2 and a half hours of presentations. Hopefully the presenters will take a leaf from Nick Hood and blog their presentations, Nick’s is unusually in the comments to his teachMeet post. It is a great comment, (and one of the few where I’ve felt Snap shots has been useful rather than annoying) well worth following the links.
I would be great if the presetator tweeted there posts @TeachMeetPerth which would provide a nice aggregation..

I talked about OpenSourceCPD more of which when I have more time at the weekend. for now I’ve put my comicLife slides, OpenSourceCPD on flickr. My TeachMeetPerth set is up too.

All in all another great teachMeet well up to the high standards set by previous events, all credit to Neil for organising, arranging and MCing.