I think I only managed one blog post over the christmas holidays. I did tumble 8 times, post half a dozen links to del.ic.io.us and do a fair bit of tweeting.
I didn’t read my RSS reader at all. I was a bit busy putting together a non-educational site, incorporating flickr, youtube and blog streams, I wish I could use video and flickr on our school site in the same way.

Last night I opened my reader and basically just marked all as read, I didn’t feel too bad as twitter had been giving me as much reading as I could deal with, lots of links for various edu (and other) bloggers and of course I subscribe to tweets from Scotedublogs which kept me up-to-date with my fellow Scots. I don’t know that I’d like to rely on twitter all of the time but it gave an interesting tilt to things and another tilt back tonight when I opened Vienna.

There seems to have been and explosion of twitter tools and addons using the and one nice one is Twitter Stats this is a perl script which you can run from the terminal in OS X and a numbers template to paste the results into after the perl script copies them to the clipboard, here are my twitter stats: 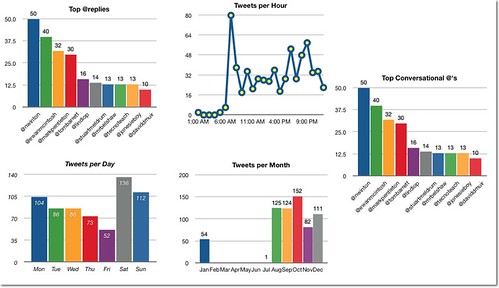 Coincidentally today my class were doing a little charting of there own surveying the communication tech they have at home as far as I recall this show a huge increase since last year.