Yep it is another iPhone post. For the last 3 weeks I’ve been spending two forty-five minute periods on the train almost every weekday and I have been finding the iPhone very useful. I’ve downloaded several games but as expected I’ve not really spent much time playing them, I just do not seem to be a gamer of any sort. This is what I have been using it for:

Mail I only have one account synced with my phone, but I’ve been able to deal with quite a few emails on the go and keep up with a couple of lists. 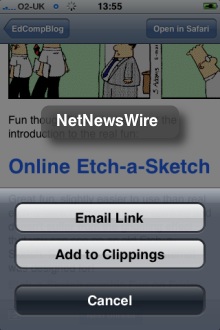 RSS feeds: I use NetNewsWire on my home mac, one at work and my iPhone. The app syncs beautifully between the clients. NetNewsWire’s interface is famous and the iPhone app lives up to its bigger brothers reputation. It is simple and easy to use. Rather than just read posts I tend to use the Add to Clippings feature this results in the posts ‘clipped’ being added to the clippings folder in the desktop application the next time it is synced. This is a great feature that I hope to exploit even more. A while back I used to post a regular set of link to interesting blog posts to the Masterclass forum, I’d collect posts in NetNewWire’s clipping folder and then get the links out via appleScript to add a few comments before posting them. I am hoping to start doing something similar soon. Collecting suitable links on the train will help. I usually sync NetNewsWire on the phone before leaving home or the office but syncing on the move is reasonably quick. Another useful feature of NetNewsWire is that you can delete feeds from the phone and specify that they will still be synced to your desktop, this means I don’t clog the iPhone app with really busy feeds. 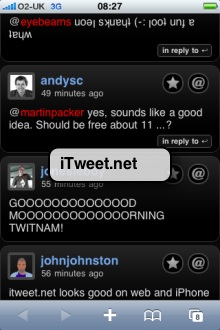 Twitter: there are various views on the utility of twitter, I put it squarely into the useful pile (maybe a venn diagram with silly and fun would be better). On the desktop I’ve used Twitterrific and more recently I’ve become a TweetDeck fan. On the phone I’d settled on the add supported version of Twitterrific which has the advantage of being able to tweet locations and upload photos to twitpic and tweet that. This week I’ve been using iTweet a wonderful web app with browser and phone interfaces. Due to it being a web app and having landscape mode I am finding it better for posting tweets, unfortunately being a web app it can’t access locations or photos. Again saving for later is a useful feature, with twitter I do this by favouring tweets for later, usually ones that link to elsewhere on the web.

Video: I’ve also been watching a few videos notably the Ted Talks my attention span for watching video on my home mac is short, but I’ve found that I can settle down to watch Teds and other video content on my phone on the train.

What I do not do much of with the phone is type, twitter’s 140 characters are fine and short emails are ok, I’ve installed EasyWriter, which allows landscape emailing to help with my fat fingers. It might be useful to have some sort of wireless/bluetooth or connected keyboard the Apple wireless keyboard works on the N95 so it would be nice to have something similar on the iPhone, I could see me banging in a pile of text on the train, to be edited and corrected later on a desktop ideally a small foldable keyboard.

Another interesting app that I’ve just bought (59p) is voiceNote, this is yet another voice recorder, but what I think is its most interesting feature is it’s ability to email the audio as an mp3 file, this means it could be used for podcast by mailing the mp3 to posterous unfortunately the emails are sent via voiceNote and have voiceNote as the email address, so do not arrive on your posterous if you send them to posterous@posterous.com. What works is to send them to your phones email address and then forward to posterous, not too much trouble. The audio quality was not great when it arrived at my iPhone Podcast 2 but it is a pretty simple way to podcast, I mam not sure how well it work outside wireless range.

What I would like to see is an email app that could email, photos, audio recording and location and to be able to use that to post to posterous (it would be nice to do video too). As mentioned above the Twitterrific application can grab locations and tweet them and photos and tweet them via twitpic so it should be possible to have that sort of functionality in mail.