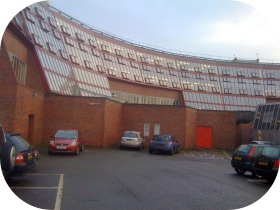 I’ve have now been working as an ICT development officer for three weeks. At this time I can only say I am a long way away from being useful, there is a lot to learn. A lot of the work of the development officers is in regions outside my experience. I am trying to get up to speed on lots of different areas.

I had a chance to be on slightly more familiar grounds on Thursday when I was invited to Cardinal Newman High School by Eileen Mallaghan, PT computing, to have a chat about podcasting. First I had to find the school and my ‘just out the wrappers’ satnav nearly got me there. Luckily I had been told that the school had a unique, can’t miss it, appearance and arrived on time.

Eileen is carrying out some interesting work using iPods with her pupils and planning more. Last session she was working with two disparate groups of children one studying for their Intermediate 2 and the other higher. To allow the children to review instruction while she was teaching the other group Eileen had created a set of video podcasts which the pupils accessed on iPods. She told me that this had a great impact on the children involved, the pupils obviously were really engaged and supported in their learning allowing Eileen to concentrate on direct teaching. Eileen has also started creating podcasts for a polish speaking child who has very little English. She created a set of slides in keynote, exported them to quicktime and then added pupil produced audio. We discussed and worked out a workflow simplifying the process by recording an audio narative in keynote and exporting to a quicktime movie, iTunes can then easily convert to .m4v files suitable for podcasting. A small group of pupils is being set up to carry out the whole process.

The next step will be to get the files for the computing pupils onto the school website allowing home access for preparation or revision. North Lanarkshire use FirstClass to provide mail, communication and websites( among other things) for their schools. I have never used FirstClass before arriving in North Lanarkshire and am a long way from understanding all of its functionality. FirstClass has the easiest method of producing a audio podcast I have seen (more on this later I hope). I could not see a way of producing and presenting a video podcast directly in FirstClass using the iPod friendly format .m4v files. The simplest way would seem to be to use blip.tv, this produces a nice looking player (I’ve an example on the Embed Tests page here) and an itunes friendly feed. Eileen and I worked through a quick test and she tested embedding in FirstClass. We should see some files appearing on the Cardinal Newman High School soon.

Eileen also described some of the other ict work being carried out in the school including a moving image project and ringtone creation by the music department using GarageBand. This again has had very motivating effect on pupils and listening to the results I was surprised at the sophistication of the music.

Eileen had a ton of other exciting ideas and I am going to arrange to visit again when I can see some of the activities in action and talk to some pupils. I was slightly nervous on my fist solo visit to a North Lanarkshire school and out of my comfort zone in a secondary school I am now looking forward to discovering more examples of good practice in the future.