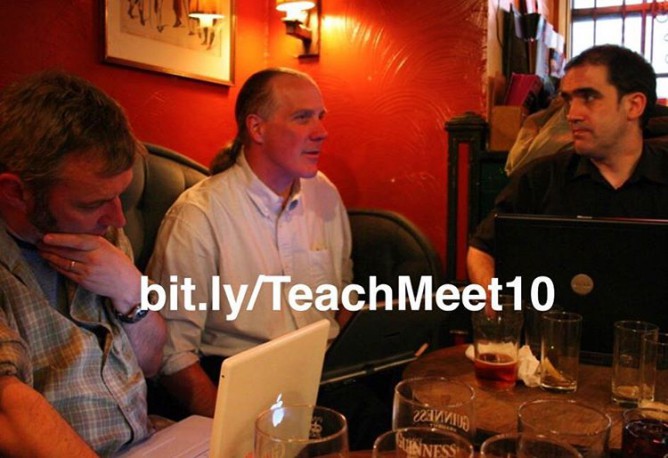 Strangely I saw this on Ewan’s instagram, it led me to a google form which looks like it is gathering reports of TeachMeet to a book that will be given away on a Creative Commons licence, with donations to a children’s charity encouraged.

How has TeachMeet changed your teaching or learning? What is the one memorable talk or conversation you had? What is the most profound change you’ve seen in your classroom? Tell us here, and be part of the TeachMeet 10th Birthday book!

from: TeachMeet’s 10! Tell your story

The main question is

How did TeachMeet make an impact in your world?

Tell your story. Be passionate. Who influenced you? Who did you meet? What was the result in your learning or teaching further down the road?

About 10 years ago I went to The ScotEdubBlogger Meetup that kicked off the TeachMeet movement. It has have a pretty big effect on my learning and life.

When TeachMeet started it seemed like something completely different and it chimed with ideas that I was starting to think about then and have been thinking about ever since.

To me TeachMeet had some interesting components. These might not be the same for other people and they are certainly out of step with the way that some TeachMeets have developed.

Lead by Ewan, these ideas were developed, influenced by BarCamp.

The first few events, felt incredibly exciting. We talked like maniacs, posted photos, wrote blogs posts. There was a fairly strong tech bias, but the mantra ‘It is the teach not the tech’ was chanted.

The change it made in my classroom was not so much the ideas I gathered from others but the the idea the teachers could make decisions about how they did things and gave me confidence to follow my own ideas.

I felt they echoed the way blogging seemed to be developing. People expressing their own views, organising themselves from the bottom up, democratic, without hierarchy. There were influences from the OpenSource movement and the tech world too. Blogs posts, flickr photos links in delicious were tagged and could be aggregated.

For me it is mixed with ideas of sharing, creative commons, openness and fun. It fitted with my growing interest in Open technologies and OER.

If I was to condense what I have got from TeachMeet it would boil down to the idea of doing it for ourselves1, owning our own spaces and sharing freely.

On the back of this trip down memory lane comes the idea of rebootingTeachMeet in Scotland: TeachMeetScot from Fearghal Kelly. There is a lot of interest and interesting comments on that post and in a response by Robert: Teachmeet+ | Learning Stuff About Stuff.

I think TeachMeet is worth going on with. Not necessarily for immediate impact on the practice of the attendees but as Robert says:

Now maybe the point of Teachmeet is to embed the good practices in the classroom of the presenters themselves. This seems more likely. I think that might apply to me. If so, we should return to the principle that Teachmeets are for presenting, not for listening.

This speaks to the second bullet above. It also hints that we need to get away from old hands organising or running the meetings. TeachMeets were in part a reaction and need to continue to be just that.

In a follow up post Fearghal explains that he can’t organise TeachMeets himself. Perhaps those of use who have and could should step back a bit. Old hands could do the boring stuff 2, but hand over to a new set of not only presenters but the chairperson’s role too.

Maybe we could suggest that all of the audience were ready with at least a 2 minute presentation or idea, no slides or screen at all. I’d like that, but perhaps that should not be the point…

25 thoughts on “TeachMeet10: time for a TM-Reboot in Scotland?”