There are only a few days until Google Reader grinds or snaps to a halt.

I can’t say I am ecstatic about this but I have been doing a little planning and thinking.

My current use of RSS and google reader is as follows: I read, I bookmark to pinboard, tweet links, collect some articles on Instapaper for reading again and I email links to my work and home accounts.

Most of this is carried out using Feeddler pro on an iPad, I occasionally also Reeder or more often the GoogleReader site on a mac. I use Feeddler on my iPhone too.

Feeddler is, in my opinion, a really good fit for the way I use rss.

For example it lets me set a preferred address (well two) which are already filled in with my home and work address, so it is very few clicks to send an interesting link to my work address from my breakfast table. Feeddler also lets me trim down the services it shows, which saves a bit of scrolling. 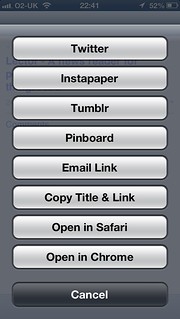 What I’ve done to prepare:

One thought on “RSS Thoughts and Actions”