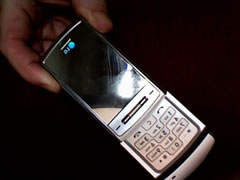 After messing around with pivot’s moblog settings for a while I eventually gave up. I know it worked in the past so I think I’ve probably just messed the config files about so badly that I’ll need to up load another one.

Flickr is blocked by websense in Glasgow schools, so I used the Flickr API and phpFlickr to pull the photos from Flickr: Photos from sandaigprimary and download them to the sandaig site. The photos are then shown of a web page: Sandaig MoBlog. The page is pretty crude at the moment but I think I can add some features as we go along( pagination, sorting by tag, maybe HaloScan commenting ).

A couple of children in my class posted a photo today and managed to add a description pretty quickly, unfortunately I had not set permissions on the server correctly and we go a page full of very odd characters. I think I’ve fixed it now that I am home and will try a relaunch of moblogging next week.

I had put my own sim card in the phone but it looks like my virgin payg account is not the cheapest way to send email. I talked to someone in the T-Mobile shop and bough a payg sim from them. According to the salesperson, data cost so much per kb but it is capped at £1 a day. I though this would work out well as we will mostly use the phone on school trips and should be able to fire off a bunch of photos for a pound a trip.

I also asked about emailing from abroad, but this seems a lot more expensive, I wonder if I could buy a sim card in holland to fire off photos for the week we were there, if anyone knows anything about mobile provides in Holland please let me know.