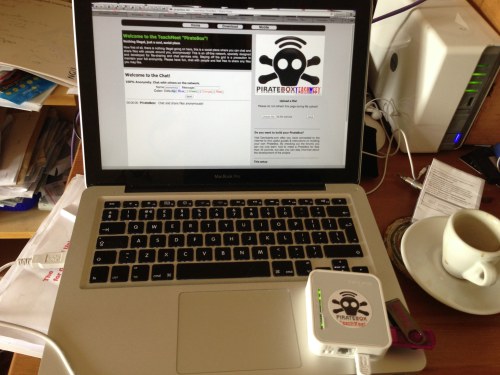 I was hoping to catch up with the Webmaker teachtheweb mooc and get some DS106ing done this weekend, but I got carried away hoisting a jolly rodger.

Almost two years ago I had a go at getting a PirateBox going.

As I wrote then Obviously TeachMeets do not need the subversion of tracking and preservation of user privacy that a PirateBox offers. Nor would sharing of copyrighted material be desirable, but It might be fun to have a PirateBox at TeachMeets.from: A PirateBox for TeachMeet?

I thought a teachmeet pirate box:

would allow folk to share files with others at the meet. If it was a traveling project, the box could go from TeachMeet to TeachMeet spreading files as it went. This would provide a sponsor-less goodie bag. Folk would be free to share what they liked, perhaps presenters would share presentations, digital musicians give away background music etc.

I ask for donations of a fiver on twitter and several folk stepped up. I then started trying and repeatedly failing to sort out the router I bought. It turned out to be the wrong model (not apparent on the box) and it left me with a bricked ruler and a little guilt.

I mostly forgot about it except when visiting CogDogBlog where the links to The StoryBox rubbed a bit of salt in my wounds. Then as part of the webmaker mooc I read, Open Web Projects on Vibrant Outlook which had some details about LibraryBox an offshoot to the original pirate box. I ended up on the pirate box site again and saw that there was a new router in town

As I was shopping for some hard drives on Amazon I added a TP-Link TL-MR3020 Router to my basket.

Yesterday I went through the instructions and they worked. Apart from one wee problem when I made a mistake in setting an ip address (exactly the same problem @cogdog had, so I am in good company). Today I set out to customise the interface a little, I used some of the files from Nargren/PirateBox · GitHub and manage to do some. I found this quite an unusual way for me to work, using the ssh command in the terminal and the vi editor. After a few gulps I managed to start work on the interface.

I am hoping that someone might try the box out at TeachMeet TMTablet the week after next….

The folk who supported my initial router, I have a PirateBox TeachMeet sticker for you, in no particular order: