After talking about it I decided to try out a tumblelog, using in this case Tumblr: John’s Tumbelog. Tumblr is a very nice application and keeps things clean and basic, there are half a dozen types of post; text, photo, quote, link, chat and video which are all easy to make either from the dashboard, a bookmark flavlet, mobile or a OS X widget. The bookmarklet is pretty smart, if you are on a flickr page it pretty much does it all for you, same with youtube, if you have some text selected on a web page and hit the bookmarklet it knows you want a quote, pulls the text and link into the popup window and all you need to do is click Create Quote. Nothing selected and it knows you want to create link.

It takes about 2 minutes working slowly to set up Tumblr the whole interface is clear, the blogs created look good and you can tweek the css with a nice web interface or just choose a template.

I don’t think tumblr blogs would be useful for primary pupils but they might have a place in sending interesting videos, links etc to you pupils if you don’t want the hassle of setting up a blog and just want to let the children see the content. For someone with a large numbr of readers it could be a nice way to share links and ideas alongside del.icio.us.

For myself It seems a fun tool but I don’t know if I would get the readership. For the moment I’ve folded my into my SuprGlu aggregation..

Interestingly the official tumblr blog uses wordpress the explanation highlights some of the differences between tumblelogs and blogs as does kottke: tumblelogs and Wikipedia

Tumblr is in very active development, scanning the last few post on the Davidville blog gives hints, there is an API, quicksliver hooks, a Pro version in the works and some community building. 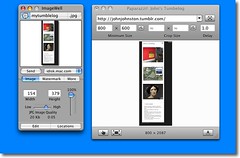 I’ve been using a few new to me/rediscovered desktop tools over that last couple of weeks (pc users can turn away). I already blogged about ImageWell which is a great image prep and upload app for quick annotation, resizing and adding drop shadows without opening a big image application. The more I use it the more I am impressed.
my Flickr tagged imagewell.

I’ve also been using Paparazzi! which is a screenshot for webpages application.
I wanted to get a screenshot of my tumblelog but include more than one entry which was way off the screen Paparazzi lets you do that. You then can drag the image from Paparazzi to ImageWell resize it, optionally add a drop shadow and notes and then upload to flickr (or dotmac, or ftp etc), very quickly indeed.
The top image I dragged to the desktop and then dragged that file to TextMate while writing this post, the one on the right I sent to flickr with ImageWell. (I really love the drag and drop stuff when using a mac, especially when combined with command tab to move through applications).
Another handy free tool for grabbing screenshots is desktopple this hides the icons on your desktop so you can get nice clean screenshots, and set the background colour. Together with the usual screenshot keystrokes these apps make a great image to blog workflow at no cost.