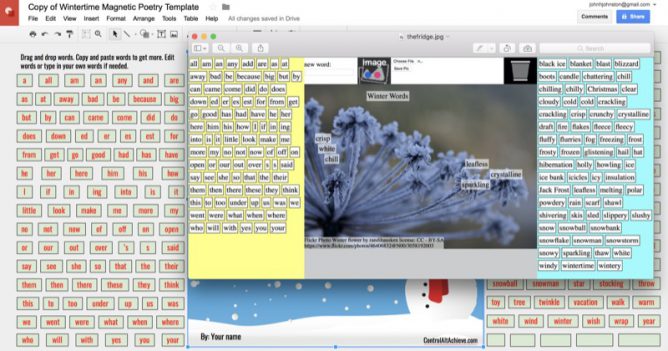 For the last couple of weeks I’ve been playing with the Fridge I blogged about the other day.

I was feeling pretty please with myself until I got a DM for Eric earlier this (UK) evening. He noticed that the dolch list on the screenshot of the webpage I had made was pretty much the same one he had used on an activity he had made and blogged about: Control Alt Achieve: Wintertime Magnetic Poetry with Google Drawings. It was the same list. I remember seeing his site when I google dolch or wordlist. I can remember copying the list but I must have done so. I didn’t keep the list, replacing it on Sunday with a full (or almost full) dolch list. But I did take and use Eric’s curation of the list without attribution at the time.

Eric was gracious enough to DM me rather than call me out publicly, giving me a wee bit of breathing room to put things right for which I am grateful.

I am particularly embarrassed as I spend a fair bit of time talking about copyright and creative commons, the image search in the fridge provides automatic attribution. I’ve often blogged about it and the difficulty in getting pupils away from a straight google search. In the previous post, I credit Tom Woodward for the idea, and link to the code I’ve used. I just didn’t even think about the words and the work involved in curating a list. I am now presuming that my using the dolch list is ok?

Eric was also kind enough not to suggest I’d taken the whole idea from his template, which looks like a quite reasonable assumption. Here I can only plead I’ve been playing with virtual fridge magnets for a while, this effort: fridge is from 2002. Made with Flash and flamethrower (sic) 1. 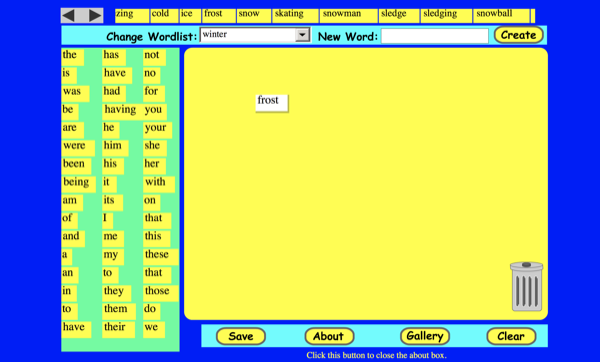 I’ve added some attribution to The Fridge now, I’ll update any help for it that I produce and link to this post from Sundays shortly.

I can only repeat my apology to Eric and thank him for the lesson.