I don’t think I am going to make many of my targets for credits in prisoner106 this week. Friday and I’ve not watched any of the footage yet.

Anyway the TV is fed from the API. At the moment we pull in a number of blogs and feeds. I’ve just added the prisoner 106 feed. This has its own special channel along with a custom button (Thanks to Andrew for helping get the channel and the button which I mangled).

As I say the API is not all that well designed, so there will be duplication, but I don’t think that matters as you watch a random stream of gifs while listening to DS106 Radio.

The are currently 1769 gifs in the API but we need more. DS106 GiF TV needs you. It may be that you are already feeding into the api, you can see the list of sources at the bottom of the page: DS106 Random Gif API.

If not you can contribute your gifs by, 1. sending me an RSS feed to scrape, or 2. Joining the DS106 Gif Gallery Tumblr and adding gifs to that. Sen me a DM on twitter @johnjohnston for either option.

Think that I might need some credits this week as I need some digging tools from the store. So I had a look through the assignment bank and found this:
ds106 Assignments: Sound to Visual with 3 credits.

Using creations you have already completed in #ds106 – select an audio project you were happy with and build upon it to create a video. Do not change or add any audio. Challenge yourself to create the images your sound story conveys. Use the sound effects story assignment or an audio commercial from your radio work. Use found or created video and stills that tell your story. Push it a step further and show how sound may not always convey the images you think it represents (extra stars).

The challenge is to use some audio already created to make a video. I decided to up the anti/or make it easier by using images I’d already made from The Prisoner too.

I’ve been weirdly captivated by both the stretched sounds and strange images I’ve found in The Prisoner. To an fevered imagination they might hint at the dark side of the shiny sixties exterior. Unless I am miss-remembering the TV of my youth The Prisoner explored some deeper territory than, say, The Man from Uncle. Perhaps this video hints at that.

I’d already got the audio and had generated a lot of images layering and mixing stills from some episodes. I decided on using Hammer into Anvil – Wikipedia, the free encyclopedia as the psychological battle seemed fitting.

Creating the ‘movie’ was simply a matter of previewing the images and choosing some (from thousands). Dragging them into iMovie along with the MP3 and doing some editing.

I am not wholly convinced about the improvements in recent versions of iMovie. I like the move at around version 7 or 8 away from the original style but think my favourite was 9.

Anyway to edit I really only did a little rearranging, sped up the slowed down sound at some points changed the images order and Ken Burns panning and inserted some transitions. I’d say the end effect is reasonably disturbing is a slow sort of way. The effect I was hoping to make.

My ideas around escape or rather not attempting to escape seem to be reflected in the surveillance tapes we were directed to watch this week. Number six seems to be more involved in Village Life and made fewer attempts to escape.

My own week reflected this, I got out a bit more and continued to encourage my fellow villagers to join in the Web Club. Joining the webclub give some extra freedoms that may lead to escape. Andrew picked up on this (Terminal Waypoint).

I spent a fair bit of time in the The Village Web Club, providing some help for fellow inmates, to allow them to decorate their clubhouses (add an image).

I also invite any villager to contribute to A Prisoner 106 Gif Story. I’ll say no more now…

Apart from that I managed a few assignments but hit rock bottom with daily creativity. I also did very poorly with the Design Blitz.

Generally I fell pretty negative about design, I think I can recognise some good design but often fail to implement it or understand it in my own creations. (Kathy cheered me up with a comment on one assignment. )

However I did read The Vignelli Canon and found it both enjoyable and useful. It also made me think about where I do exhibit taste in design. I’ve been trying to buy a shoulder bag for a while now. All the reasonably priced ones seem to have magnetic poppers disguised as buckles. This combination makes it almost impossible for me to buy a bag, perhaps I do have a sense of design after all. 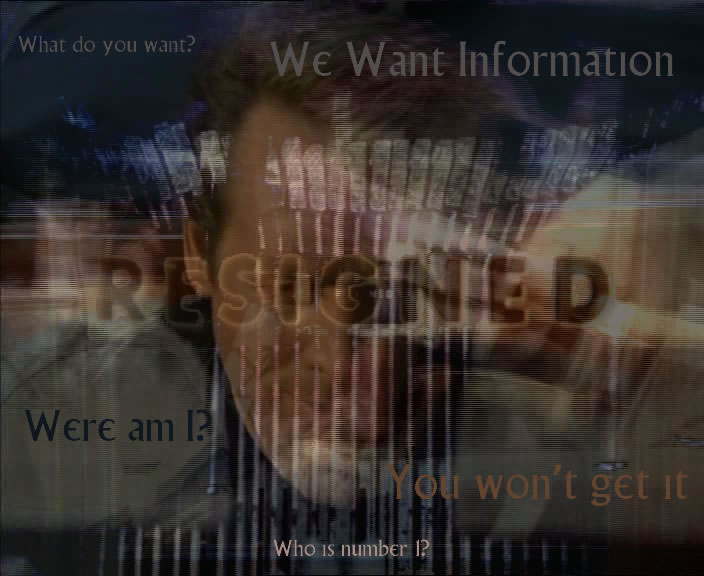 A quick gif with audio. A warm up watching Hammer into Anvil. An interesting episode, no escape attempts but a moral crusade by Number 6 and a battle of minds with Number 2.

More fist fights and physical action than most of the episodes so far, kosho looks like fun.

Another ds106 Assignments: Animating #Prisoner106 for an early 2 credits.