After finding some old photos I dug around the apartment some more and found a page of an old comic: 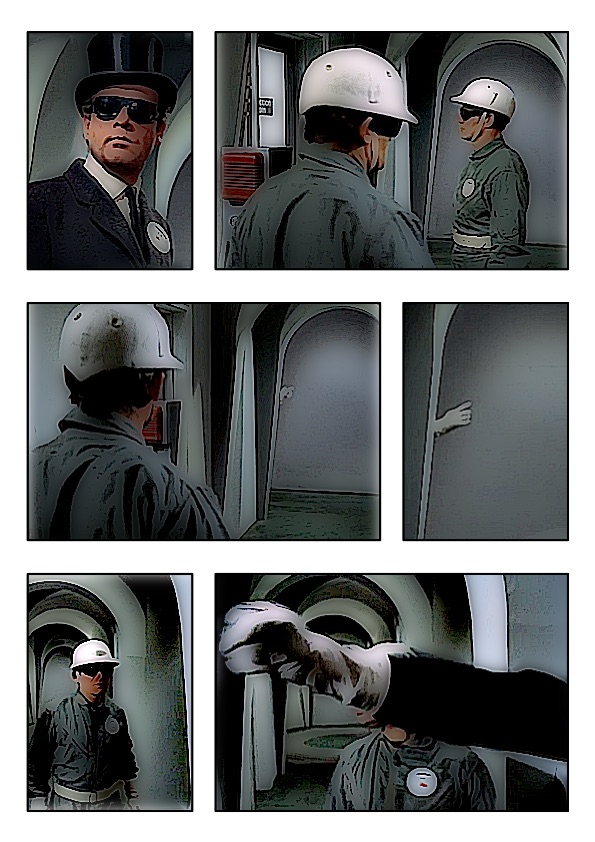 Something told me this was no ordinary comic, I sneaked into the General’s room and, with shaking fingers feed it into the machine:

As the paper emerged I grabbed it and turned it over:

I’ve done a fair number of Multi-Frame GIF Story Assignments and I really like them. One thing I do not like is having to have each animation at the same rate and with the same number of frames. You can work round this by ‘freeze’ framing a particular frame or several frames, but I quite like the idea of the gifs all going at their own rate and not moving in sync.

After I’d giffed a few from Perchance to Dream I though I’d try a slightly different approach. I’ve uploaded all the gifs, but instead of inserting them I created a bit of html to show the gifs.

I’ve put the code into an external page too, if you want to have a look: perchance_grid , where you can easily view the code.

Perchance to Dream has been my favourite episode so far. I’ve not left enough time to write much about it and I’ll be stepping out of the ds106zone for the next week, which means I’ll miss audio week. I might join in the odd daly create, but if not I’ll be back in the zone next weekend.

So I am trying to get an idea of the twilight zone before the next round of DS106 starts. It looks like you can watch any of the first 3 seasons on The Twilight Zone Video CBS.com if you live in the USA. I may have to investigate some sort of fake us ip device to see these.

I am beginning to get into the zone, but I found the exposition from Rod Serling a bit much, great voice but I think this episode would be better without the explanation.

On second watching I grabbed gifs as I went through. There is plenty of banging, ringing and the idea of repetition in the tale, I hope some of this comes over in the combi gif above.

The gifs are all short, 7 frames. I combined them by importing them into fireworks.

I am pretty sure there are a few good pun titles for this gif just beyond my grasp… can’t get out of the zone, sort of thing.

After knitting together the gif above I though that two of the frames would work, here is the major begging Rod not to talk so much.

I am wondering about redoing this one with Jim Groom in the Rod Serling position.

I guess this is a Multi-Frame GIF Story as well as a From the Twilight Zone, and Beyond … Assignment.

I though the gif at the top looked better on a black background, so wrapped it in a paragraph:
<p style="background:#000;padding:45px">

More BBC inspired giffing. nice to see some B&W back on the box. The Big Steal – Wikipedia, the free encyclopedia described as a noir/comedy staring Robert Mitchum and Jane Greer is great stuff.

I just marched through the movie grabbing some sections with Movie2Gif – John’s World Wide Wall Display doing a little extra cleaning up in fireworks.

Unfortunately I didn’t manage to find any section to illustrate the most interesting aspects of the movie. Firstly the female lead was I feel treated as more of an equal that usual. The only North American who could speak good Spanish, the movie is set in Mexico, she held her own bantering with Robert Mitchum, driving a car and firing a gun in fairly high heels. , the villains all shouted at the Mexican characters. The two main Mexican characters spoke good English and displayed intelligence.

I didn’t manage to gif any of those moments but here is a few I did:

Wandering round youtube I found Jack Kerouac (rare footage) / Cat Power – Good Woman – YouTube. Most of the Kerouac I’ve seen have been chat show footage with a drunk Kerouac. This clip shows his gentler side. Unfortunately to get the gif file size down I had to crush it hard.

I guess this is a ds106 Assignments: Multi-Frame GIF Story.