So I am looking at Headless Weeks 13 & 14: ximeR and M@$#up, there is a lot of stuff to watch, read and think about. There is also Alan’s Triple Dog Dare for one is:

Remix a photo of Cory Doctorow

Which I’ve done before.

So I end up on my usual ds106 pattern, browsing through the assignment bank until I circle back to the first one (Cory). By this time I’ve forgotten some of the details, but I am busy dreaming and googling.
I start with Yul Brynner, and veer to Kojak. I’ve now forgotten all of the details and heading for a Troll Quotes. The idea in my head is a wonder, perfect photocopying, I’ve forgotten I don’t know photoshop and a searching flickr for a background. 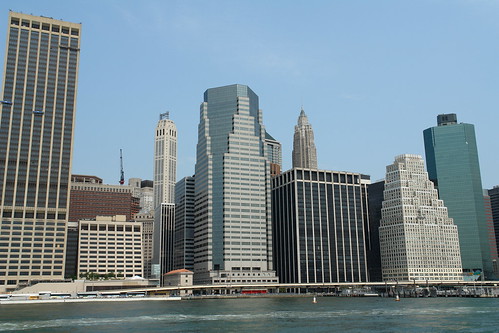 My imagined assignment is now better than perfect. Then it is all cloud filters, saturation for the brown ‘kojak feel’, a bit of a mask on Cory to try and get a drawn feel.
By bedtime I am delighted, in the morning I realise I am probably missing the target on a few levels, driving to work I decide to post anyway, maybe I could get a story out of the making?

The quote: Quote by Yul Brynner: We are born alone, we live alone, we die alone….

So I’ve not giffed much recently. Last week I decided to join in with the ds106 offshoot, Giffi.us A Collaborative Story with He had to run for his life, this then helped with the design assignment from two posts ago.

Given a bit of free lunch time time today I was musing on the idea and wanted to make a couple of illustrative gifs. A quick search on youtube for transformation struck black and white gold: The Transformation – Dr. Jekyll and Mr. Hyde (1941), what was great about this movie was the lack of a moving camera.

First I grabbed the transformation itself, then another couple of gifs. All very straightforward, crop to short selection in MPEG Streamclip (i an o keys are your friend), export to stills and pull into Fireworks.
In Fireworks, select all layers and distribute to frames. 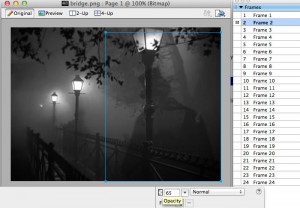 Part of week 2 in the headless ds106 is to Say It Like the Peanut Butter.

I’ve done a few of these and made a wee tutorial last week for doing it with Fireworks. At first I had another dig through blade runner and La Belle et la Bête, but wasn’t delighted with the results.
Then last night I went to the movies to see The Great Beauty, which was a beautiful movie in all sorts of ways. I was a fan of Toni Servillo from The Consequences of Love and Il Divo and this increased my admiration. So here is his beautiful face, ripped from the trailer on youtube.
I duplicated the very short segment and reversed it to hide the seems. The gif started out a over 2mb and I crushed it as much as I could, eventually resizing down to 360 pixels. I am going to scale it up in the html here.

A quick screen cast showing how to make an animated gif for the photo it like peanut butter assignment:

Rather than making animated GIFs from movie scenes, for this assignment, generate one a real world object/place by using your own series of photographs as the source material. Bonus points for minmal amounts of movement, the subtle stuff. See a bunch of examples at http://cogdogblog.com/2012/02/10/photo-gif-peanut-butter/

Same procedure for the ds106 Assignments: Say It Like the Peanut Butter

So this is a double tutorial;-)

I like Fireworks for giffing as it clearly separates layers and frames in different palettes. I’ve not used multilayer frames in this video, but it is handy for other gifs.

The video does not really show how to opne the different palettes, I didn’t plan it that well. I added text to explain a couple. Basically I used the Frames.
, layerers and optomise palettes. All open from the Windows menu.

Unfortunately Adobe is discontinuing Fireworks. I am still using the one that comes with CS3. It works fine on mac 10.8.

Although I’ve done a fair number of these to assignments I have no idea why peanut butter is involved.

Today August 2013 GIF Challenge #11: Get Your Wiggle on based on ds106 Assignments: Wiggle Stereoscopy

There was a bit of chat on twitter today about using a mobile for the upcoming ds106 headless course. I’ve used an iPhone and iPad for a few assignments and a fair number of daily creates so though this might be one t otry. I started with my new fav giffer app, 5SecondsApp, but didn’t get far. It hade worked well for a couple of seamless gifs recently but I could not get a good wiggle. The then turned to giffer pro which did a better job for me.
The whole wiggle process is describe well by Rockylou today.

Here is one with iphone photos edited in Fireworks on my mac.

PS 1, there is a nice site: NYPL Labs : Stereogranimator for playing with this stuff with old 3D images from the stereograph collections of The New York Public Library.