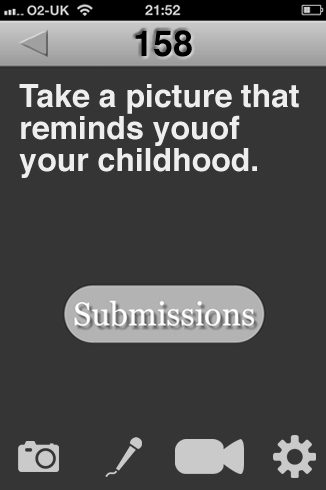 The assignment is to reduce a movie, story, or event into its basic elements, then take those visuals and reduce them further to simple icons, four of them. Write your blog post up but do not give away the answer, let people guess! The challenge is to find the icons that suggest the story, but do not make it so easy.

No one will have difficulty guessing this one

I love the noun project. The workflow suggested in the task is, I think, screenshots, I downloaded the illustrator files, copied the icons to fireworks.

Animated Movie Posters Pick a movie poster and animate it.

I am still trying to play along with the spring DS106 course. for the first couple of weeks I was keeping up this week I’ve let it slip, I don’t think I posted a Daily Create once. It seems much easier to do them all than to pick and choose, once you miss a couple it is easy to keep on missing them. The previous week I had managed to do a wee bit of commenting but this week I’ve only made a couple. Lots of other things kept getting in the way. The fact I am involved in Ed Tech Creative Collective and trying to keep up with Code Year(only 2 or 3 weeks behind) is a fair excuse.

The other thing is that this poster took a lot longer than I expected. If I had figured out the layer logic first it would have been a lot quicker.

I’ve also noticed that my feed, as this is not a wordpress blog, has not being playing nicely with ds106, the posts show up on the home page but assignments and tutorials are not being pulled to the assignment pages. @mburtisis going to try my feedburner feed instead, so hopefully this post will show up in the right place.

I’ve been thinking a fair bit of about the similarities and differences of ds106 edtechcc & codeyear but I think I’ll podcast those later this week.