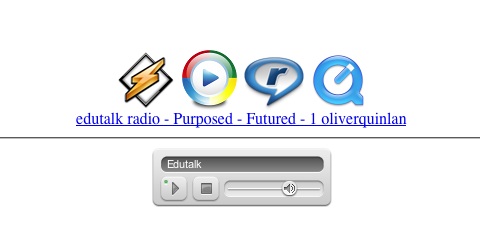 Edutalk has now been running for over 2 years, we have published over 300 pieces of educational audio. These vary from TeachMeet recording, through to personal reflection by way of pupil podcasts. Hopefully theses provide interesting and educational listens.

One of the things that David and I talked about when we started EDUtalk was issuing a CD rom of recordings, this would perhaps have helped to keep older, still valuable, audio playing.

One of my thoughts about podcasts is that older episodes get forgotten about in a way that old blogs posts, through searching, do not.

REcently I’ve been reading about and listening to ds106 Radio and Stephen’s Downes’ Ed Radio. These are Internet radio stations. My interest was also stimulated by my daughter who is currently doing some pro bono work for Airing Pain « Pain Concern a podcast and internet radio.

I’ve alway believed (and gone on about) one of the benefits of podcasting over radio is its asynchronously. The potential audience for internet radio would seem to be less. A few things have made me think again:

A comment on Stephen Downes – Google+ about ED Radio:

That's the intent of Ed Radio, it's not something you really focus on, it's more background where you listen while you work & where something may or may not catch your attention.

Somewhere else, Stephen wrote about the interesting challenge of broadcasting to no listeners. Can’t find the quote at the moment.

How does the ability to instantly broadcast live audio to a group of people impact what we do? How does this instant synchronous connection effect the sense of social presence? And how does having to make the decision of streaming vs. recording effect the experience of sharing?

I’ve also been impressed by the quality of internet radio when streaming to a phone on g3 as well as wifi. So we though we would give this a go

There are various posts on the how to set up a station but I basically went to Internet Radio Servers and set up an Icecast server on pay as you go. I then followed CogDog Guide to Nicecasting – CogDogBlog to test Nicecast. You can use Nicecast to broadcast from iTunes or a mix of iTunes and voice or even iTunes, voice and Skype. You can use Nicecast for an hour at a time for free and pay when you have tested it. I am using it on test mode at the moment. I have also tested the AutoDJ set up, where the station just streams from a set of mp3 you have uploaded via ftp. this seems to works well. Instructions on Internet Radio Servers are straightforward.

I’ve briefly tested Papaya Broadcaster a £2.99 iPhone & iPad app this seem to do the trick. allowing you to broadcast on the move.

The costs at the moment £5 a month to host the AutoDJ files and £5 per 10GB broadcast. I am figuring with only a few listeners it will only be £10 a month to broadcast for an hour or so each night, using a variety of sources.

We have a few loose ideas of what to broadcast:

What I did was open the Terminal, navigate to the folder full of mp3s (on a mac you can type cd and then drag a folder onto the terminal window), then you just put this int othe terminal window and hit return:

What that does is make a new folder save inside the mp3 folder, then use lame to convert all the mp3s in the folder into new files in the save folder that all have a bitrate of 128, a sample rate of 44.12 and are mono files. Well worth doing if only to avoid having to see asave dialog 60 times.

between 7:30 and 8:30 head over to Radio Edutalk – EDUtalk. A flash player should start when the page opens. There are also buttons to listen with winamp, Windows Media player, Real player or QuickTime. Hit the title song to open in iTunes.

I’d love to hear what folk think, ideas for broadcasts or cc licensed audio that could be played.

Digital Storytelling (also affectionately known as ds106) is an open, online course that will begin on January 10th, 2011. This course is free to anyone who wants to take it…

I’ve been following mostly through bavatuesdays the blog of Jim Groom.

As an aside I first blogged about Jim a few years ago, pointing to the marvellous Welcome to the People’s Republic of Non-Programistan which seems to have vanished and The Party Line which is still there.

One of the things that the ds106 folk have been doing is creating animated gifs from very short sections of movies. I am still not sure if I see the whole point of this, but it becomes a very addictive process. Recently Jim posted: Creating Animated GIFs with MPEG Streamclip and GIMP and pointed to another tutorial Better Animated GIF Tutorial for PS CS4 « Bionic Teaching. This got me playing and thinking a wee bit on a rainy weekend.

I’ve not got Photoshop and have seldom opened GIMP, but was creating animated gifs just last week for a blog post. I used Gifsicle which is a command line application to create animated gifs and works very well indeed on OSX (and is available for lots of other platforms) Gifsicle is © Eddie Kohler.

I am only using a very few of the many gifsicle options here, you can see all of its features on the Gifsicle Man Page

I wanted to speed up my workflow playflow for messing about in this way and though of SuperCard, my favourite mac application. I’ve used SuperCard to create a simple application (mac only) that will, load a Quicktime compatible movie, grab a short selection of frames, and create an animated gif with a few mouse clicks. The SuperCard bit grabs the frames and then used the gifsicle app (which it contains) to create animated gifs.

Here is a screencast:

You can download Movie2Gif from my dropbox, it is a rainy afternoon project miles away from a polished bit of software but might be useful/fun for someone.

If you Movie2Gif and give it a try, let me know how you get on, if it gets any positive feedback I’ll do a bit to improve it. Please send any suggestions, bugs etc to me.