Given the excessive rain, I started thinking about exploring the mind, vaguely thinking of some sort of psychedelic movie, or even La Belle et la Bête which I’ve grabbed more than one gif from.
I don’t really have the toolkit or skills for skewing some sort of kaleidoscope, tunnel nightmare vision but I remembered I’d used Screenflow to do something like this with titles in my BRIGADS106 movie. and though I could do a little testing.
Screenflow is designed for screen-casting, but it lets you layer video (from its builtin screen-capture and elsewhere), text, and images. It allows you to zoom, arrange, rotate and transition to and from these effect on a layer-by-layer basis.
My first idea was a journey through a dark tunnel/gallery with animated gifs lining the wall. As I started experimenting I realised that this was probably doable, but not by me in an afternoon. I pivoted to do a journey into ds106 as a slightly wizzy screencast using some of screenflow’s effects, even this took most of the afternoon to complete.
In ScreenFlow you can add a ‘video action’ to a clip. After adding this you can set the zoom, rotation etc of the clip before and after the action, Screenflow will tween between the two.
Here is a screenshot showing a clip with a video action (click for full-sized): 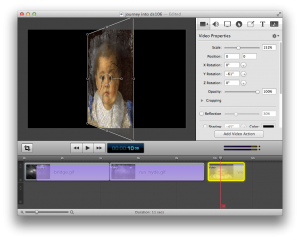 And a gif taken from the exported video.

Interestingly you can use gifs in screenflow, I guess they are played via Quicktime, but unfortunately they do not loop. You can get round this by recording the gifs in screenflow. As I’ve been writing this up, I made a very quick experement.

To make this work properly I’d need to think a good bit more about angles and timings, but I think there are some possibilities for fun.

You will need to click on the thumbs to see the action.
A few gifs for the 1840s GIF party: call for submissions | Tate. I’ve already posted them on Tumblr, but thought I’d add them here. See the previous post for more details.

Part of week 2 in the headless ds106 is to Say It Like the Peanut Butter.

I’ve done a few of these and made a wee tutorial last week for doing it with Fireworks. At first I had another dig through blade runner and La Belle et la Bête, but wasn’t delighted with the results.
Then last night I went to the movies to see The Great Beauty, which was a beautiful movie in all sorts of ways. I was a fan of Toni Servillo from The Consequences of Love and Il Divo and this increased my admiration. So here is his beautiful face, ripped from the trailer on youtube.
I duplicated the very short segment and reversed it to hide the seems. The gif started out a over 2mb and I crushed it as much as I could, eventually resizing down to 360 pixels. I am going to scale it up in the html here.

look for a part of a scene in a 3D type movie where the thing comes right out of the screen at you and then makes a GIF out of it.

This could be quite a time consuming challenge, unless you were a 3d fan.
I just went to youtube and put 3d movie in the search. Halfway down the results was Ramayana – The Epic I clicked through and skimmed through the movie. I usually use Fastesttube to grab youtube videos but this one was over an hour and a half long, so I used quicktime to record the screen to a movie file for a short section. This section I opened with MPEG Stramclip and trimed to a shorter section. This was exported to an image sequence, setting file type to jpeg, quality to 80% and 12 frames per second.
I got 60 images in a folder. I had exported at full size 1280 pixels wide so I used the sips program in the terminal to resize them (I could have done this in MPEG streamclip, in the export settings or later in Fireworks, but sips is a handy thing).

To use sips you open a terminal window and type:
sips –resampleWidth 640
Then drag all the images from the finder into the terminal window. This lists the paths to these files after the command you just typed. It looks a bit of a mess but just hit return and all of the images are resized.

I open the first image in Fireworks to create a new document, then drag all of the other images onto that document window. This gave me a 60 layer doc. I clicked on one layer in the layers window and then cmd-A (Select all) .

Next I open the frames window and from the popup menu at the top choose Distribute to Frames this gives me a 60 frame animation. It is also about 3mb.

In the frames window I cmd-click on all the even frames and drag them to the bin. I select all the remaining frames and double click on the Frame Delay column, I double the delay to 14/100 and preview. Still a bit big.

A preview shows this looks not to bad so I have a look at the Optimise window. Mostly adjusting the number of colours. Exporting a gif each time to see what it looks like. (I really like the feature in fireworks that in a file save the warning dialog that you are going to replace a file has its default to OK to replace rather than cancel). I finally settle on 128 colours which give a 750k gif:

A couple of weeks ago I did a screencast of using fireworks for giffing, but missed a couple of important points. I will redo and publish in case other ds106ers would find Fireworks a useful giff tool.