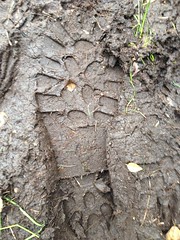 I took the first step on my headless journey on the 26, with a quick daily create for Make an impression: take a picture of an indentation. Not a particularly interesting photo, but I like the idea of a first step and you cannot get further from your head than a foot. I managed another couple of photos during the week.

The most interesting, to me, create this week was: Edit an existing video clip to include an unexpected object in the story but I missed the deadline. I did post a quick example of using the bluescreen to Google+ – A day late dailycreate, just to show a wee bit of iMovie… as that is the sort of thing I’d want to do given a bit more time.
I deliberately choose daily creates that would not take too much time. I have a strong bias towards photo daily creates, I am not fond of drawing or writing much more than a haiku, but I find that the photo assignments can make me a bit more mindful of the visual environment throughout the day.

I had put my name down as a a helper for the first week of ds106 and as part of that I decided to do a short podcast, due to lack of prep I though that one was a bit lacking so I hatched a plan.

So the plan now is:

So far I’ve managed a couple, one of general ds106 stuff the second on creative commons.
I am hoping these will be of interest to ds106ers in general and perhaps useful to newcomers.

For pretty thin reasons I decided on a chicken theme for the podcasts, with chicken related music and an accompanied with an animated chicken gif. I’ve managed to hit the 10 minutes prep, 10 minutes broadcast on ds106 radio and 10 minutes post and posting. These are not polished podcasts. It will also give me a chance to play with nicecast. I use this every week over at Edutalk but don’t do much more than fire up skype and record some conversation, adding some iTunes into the mix is a start.

I also posted a short screencast on giffing with fireworks.

I’ve pretty much got my blog and various services set up, but I’ve now added an about page to the blog and have messed about with the css of the theme a little. I’ve updated the plugins and installed jetpack to keep a check on how few folk are reading this and add the subscribe to comments by email button. I’ve appreciated that on other ds106 blogs.

Of ds106 is, to my mind, the reflecting, I manage to dodge the main idea and have a bit of fun yesterday. I think that found poetry for dodgy auto generated youtube captions could be an assignment.

Joining in and Joining up

As usual one of the most interesting things in ds106 is watch other folk. I’ve been trying my best to keep up with the flow and dropping the odd comment. The difference this time is the google plus community. I feel a wee bit conflicted about this, I can see that some folk love it, it provides another channel for keeping up, discussion and sharing it is also another place to publish media.

But, I think there are a few drawbacks, the comments in g+ are not attached to the post or media they are about. It is hard to keep track of conversations you take part in. Media posted to g+ is difficult, if not impossible to embed in a blog post, G+ is another silo that it is difficult to get out of. Overall G+ is worth going to for the people that are there, but I’d prefer that g+ was a better open web citizen.

One thought on “First Week without a Head”