I am slightly late with this weekly review and it will be short on thinking. I had got a couple of posts under my belt before the official start date so was feeling fairly smug. I am also listed as a true friend of Talky Tina which brings a certain amount of responsibility, I don’t want to let her down.

I managed the required 4 daily creates, my first is probably my best. 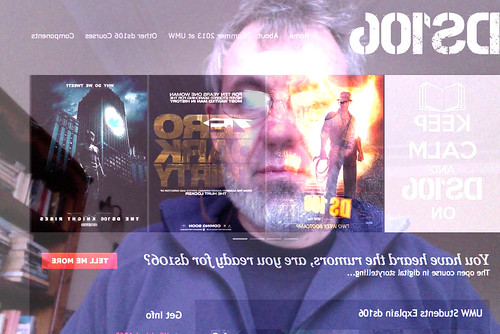 The idea is that this is a computers view of me. I was riffing on a remix from the Mozilla Teach the Web Mooc, Here’s iterating at you, Chad which was working of an idea I saw on flickr sometime and had used in a blog post or two. Somewhat bladerunner I think.
I iterated this a bit more int oa gif for my first assignment Trapped in the Zone which is probably a better idea that it looks.

The only other post I managed was Roots for Riffing which combined a remix and a run at a new assignment.

This is my favourite bit of ds106 stealing borrowing from other participants.

It was Thursday before I watched Jim’s ds106zone: Introduction and Syllabus Review which is just a wonderful introduction into organising online learning, I’ve been rabbiting on about this model during discussions of the next phase of Scotland’s educational intranet, glow so passing this video on like mad.

I’ve also manged to listen to a few of scottlo radio blog ds106 LoDown podcasts which are pretty wonderful. I listen to Scott regularly and love his work. His voice is great and he manages to record where the background sound, kids playing football, cooking or arabic music playing on the radio adds to the rich mix. Sometimes Scott is just facinating while ruminating about what he is doing. Week three, the audio one, looks like being a great bit of ds106 this session. I’ll be away from home without a connection so I’ll miss that bit.

I’ve watched the odd episode of the Twilight Zone, A Nice Place To Visit did not really excite me, I ripped a couple of gifs from this, but don’t think they were interesting enough to post. Last night I flicked through Perchance to Dream part 1 which looks more interesting, again grabbed a couple of obvious gifs:

Was an easy one. The next with the eyes is a bit rough round the edges but I could not get it a smooth as I wanted despite quite a few edits, this one is at least 75KB small:

Finally a nice spiral, the barrel could be fixed with a bit more time. I’ve not watched the episode through yet, but downloaded it in two parts from youtube and look forward to it.

As usual I used fireworks to edit the gifs after ripping them from the movie file with my own wee dingus.

I promised myself I’d try to do a good bit more commenting but I not done too well. Started to save the posts I commented on on pinboard but I missed a few. Must try harder!

Off on holiday for a week on Saturday so I don’t suppose I’ll get much done, hopefully return to the fray week 4. If I get a connection I’ll keep up tdc at least, but I’ll not be carrying a computer.

Finally although I’ve not comment much the flow is fast moving and exciting.