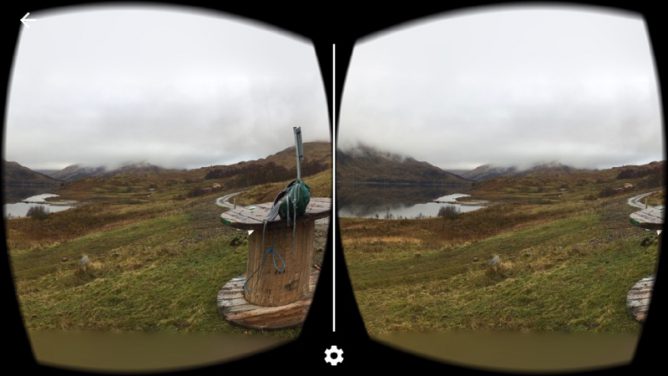 A while back a blogged about my classes brief experience of Google Expeditions one of the things I didn’t mention was the thought that it might be interesting for children to be creators of content.

The other day I was reminded of Google Expeditions by Malcolm Wilson’s post Are we really there? Virtual Reality in the classroom which gives a great overview of VR & Google Expeditions. He also posted some links. I’ve not followed them all but one leads on to Cardboard Camera on the App Store. This is a google iOS app (there is an android one too) that can:

Capture and share moments with virtual reality (VR) photos. VR photos let you experience scenery and sound in every direction and in 3D, making things near you look close and faraway things look far away.

I’ve only had time to give it a couple of quick tests on my phone. The one I made in the class certainly seemed to impress the pupils when viewed in Google Cardboard.

The app saves at an image with a .vr.jpg extension in the camera roll as well as the app. When imported to photos on a mac this turns out to be 10994 pixels by 1706 and weights in at 4.9 MB. You can see an exported & much reduced version below.

As you view the image you can hear the sound recorded at the time. So You can either have atmosphere or a voice over.

According to the app store:

I wonder if it is worth having an iPod Touch in class. I have always been slightly surprised that iPod Touches disappeared from the education scene when the iPad came along. The fact that they should work in google cardboard or other VR viewers might bring them back?

Featured image screenshot of the Cardboard Camera in action.